Version 1.2.3 of SlickEQ GE introduces an new “deresonate” action. This is a nice tool that helps find resonances in a track and keep them under control. Deresonate can be of great use in mixing and tracking situations, and generally offers interesting starting points to handle excessive room resonances in recordings.

This article highlights two practical examples and takes care to explain some technical concepts along the way. Both examples utilize SlickEQ Gentleman’s Edition on the tracks.

We start analysing the input by starting playback and pressing the toolbar’s Learn button. The learn operation is then stopped after analysing the passage of interest. 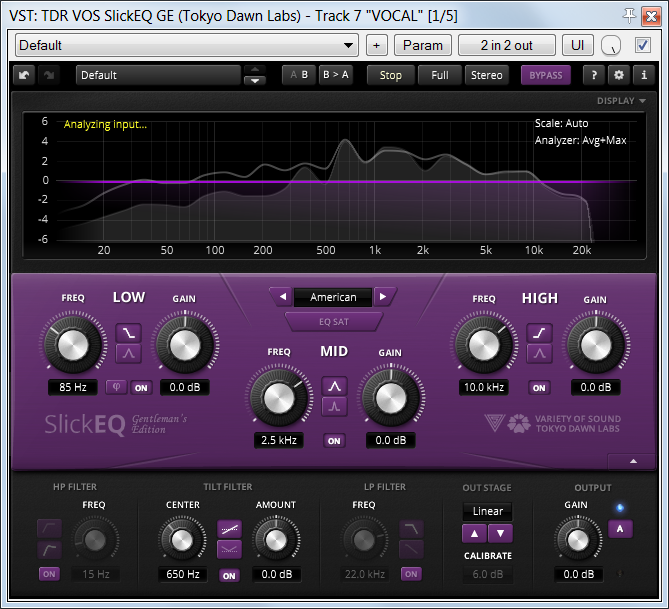 As soon as the learn process stops, a half transparent white line representing the analysed input appears on the display. In addition, the button previously titled Learn switches to Action. We click this button to open the Action menu, and select Deresonate. 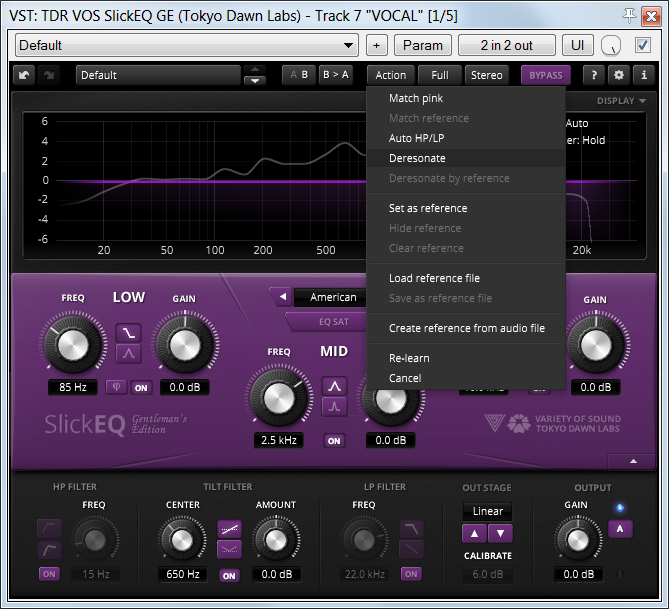 The deresonate process searches for the 3 most “dominant” resonances, whereby “dominance” is defined as a function of narrowness and relative level of spectral peak (i.e. narrow peaks are weighted higher that wide peaks). The “Japanese” mode is automatically selected as it’s best equipped for surgical cuts. However, do not hesitate to cycle through the models after using deresonate, or adapt the EQ bands to taste. View these actions as smart starting points! 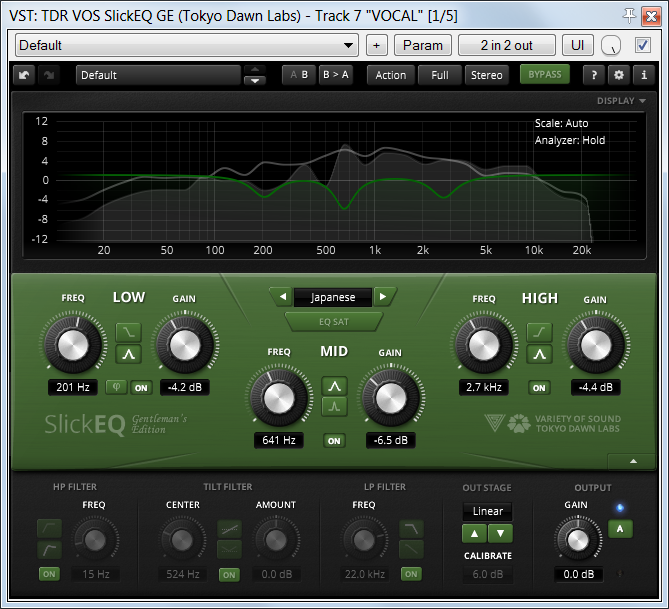 In some cases the algorithm classifies changes as irrelevant and sets Gain knobs to 0.0 dB but the frequency points will be centred around peaks. So it still offers sensible starting points for further adjustments.

Gearslutz forum member Den created the following video showcase (many thanks Den!), this time with a guitar recording.

Across the mixing desk

The same technology can also be used to reduce the most dominant frequencies relative to another track. It can help keep a sonic “clash” under control when two similarly structured tracks mix together, prioritize a track within a mix, or just give interesting clues to the operator. This time we’ll obviously have 2 tracks: Vocals and guitar, each running an instance of SlickEQ GE.

We first analyse (“Learn”) both tracks by pressing the Learn button (for each track).

On the vocal track’s SlickEQ GE instance, we press “Action” and select “Set as reference”. This process takes the learned spectrum (the half transparent white line) and generates a reference curve from it (white dashed line). Note that the reference curve is automatically synced across all instances of SlickEQ GE, and persists until overwritten by another learned curve or deleted via the Action menu.

We move over to the guitar track and see the previously set reference curve (remember, the reference curve is system global). We click “Action” and select “Deresonate by reference”.

The algorithm takes both the reference curve and the “learned” curve of the current track into account. If a target track already has natural “holes” at the required frequencies, cuts will be decreased and may even can become zero (as you can see this happening for 2.7k on the screenshot above).

As with our previous example, this process only delivers a starting point and should alway be taken with a pinch of salt. Time to tweak it further! Not only do SlickEQ GE’s different EQ models now offer creative alternatives to the initial proposition, the operator is still free to use SlickEQ GE’s countless other options to improve and perfect the balance of a mix. Give Your Delays Some Color Keeping your TDR plugins up to date