The Kotelnikov dynamics processor series is probably best known for its transparent and precise behaviour. Despite this, the wide range of operation allows provoking musically interesting side-effects. The “Gentleman’s Edition” (GE) in particular features several musically useful modifications to the transparent “ideal” the concept is following by default.

This article will takes a closer look at various ways of pushing Kotelnikov to creative uses. Following examples utilize Kotelnikiov GE on the tracks, but some will also work fine with Kotelnikov Standard. Some of the following audio snippets are quite subtle. In doubt, turn up the monitoring level or use your headphones.

Basically, the path generating the highest amount of gain reduction takes control of the audio output. This transition is not abrupt, but smooth and gradual.

In order to push Kotelnikov to its limits, we have to understand that RMS path controlled compression produces almost no harmonic distortion at all. This is a natural result of the technology employed, literally incapable to deliver any objectionable distortion: 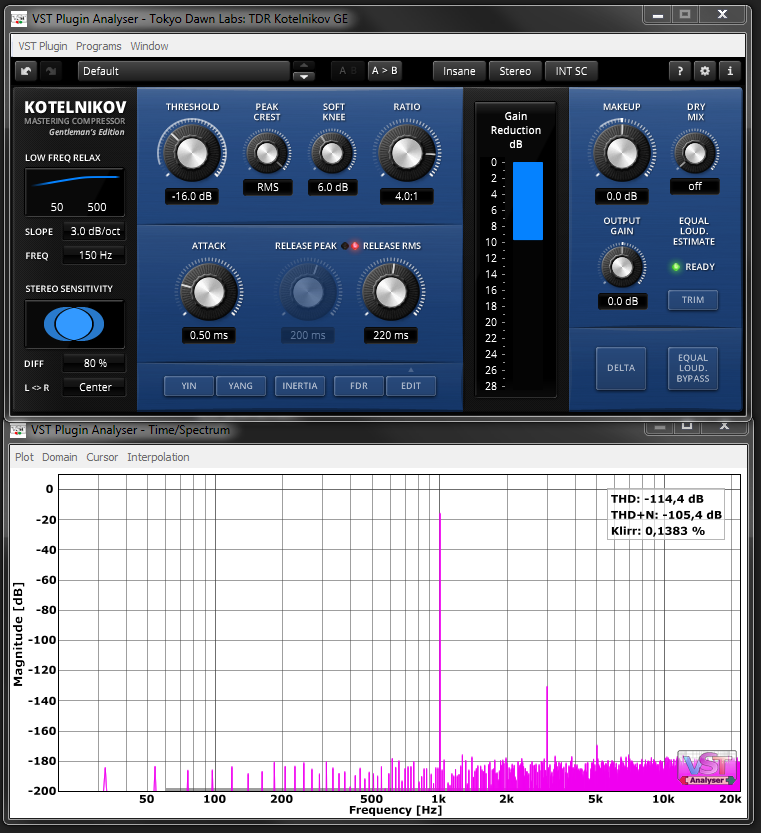 The Peak path on the other hand, when taking control of the signal, is likely to produce strong amounts of harmonic distortion. Especially with fast settings: 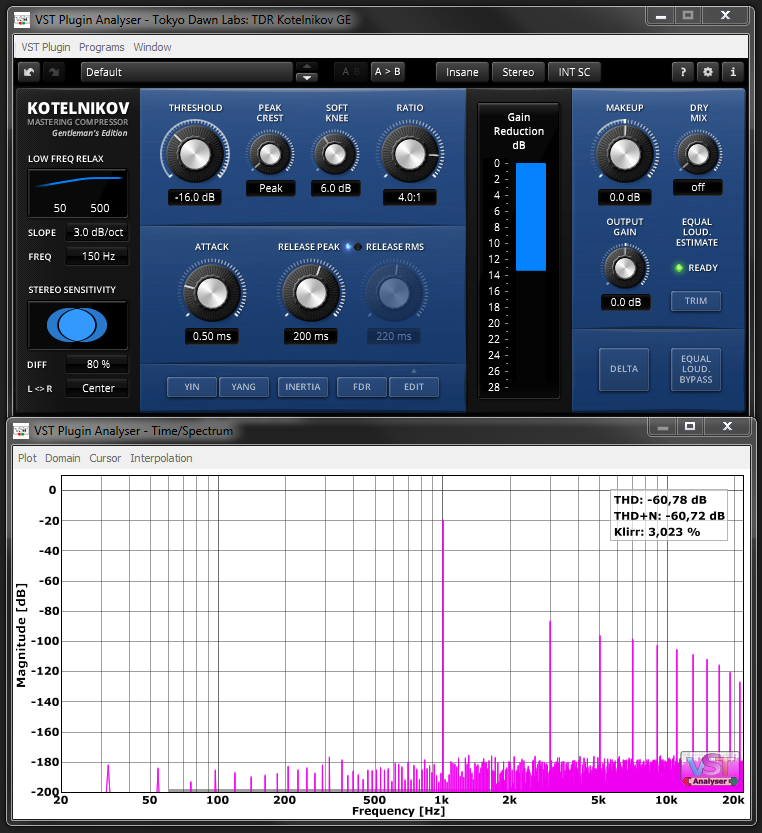 This remarkable operational contrast is an important reason why this compressor works so well across a wide range material and settings. Only the RMS path is truly clean, the PEAK path is not. This is an intentional part of the design, and should be taken into account when trying to deviate from the norm.

Let’s compress a loop with aggressive settings. The sample intentionally contains background noise and hiss, which will help us to perceive how the compressor behave during the release phase:

Although we can notice subtle differences between the peak and RMS paths, the relatively strong harmonic distortion of the peak path can be difficult to perceive. The Peak version sounds more processed. The RMS version on the other hand sounds pretty clean. Their different nature become much more obvious when we listen to the Delta of each path (the difference between the compressor’s input and output):

This time the different nature of each path becomes much more obvious. We hear how the peak path precisely attacks wave by wave (and thus, produces plenty sharp harmonic series, and delivers good overload protection). The RMS delta on the other hand is very smooth and clean, but also grabs both to little and too much material than it really should. Each has advantages and drawbacks. The most useful results are typically found when both paths interact in a sensible manner:

The Peak crest parameter controls the balance between both paths (technically: The offset between their thresholds). Turn it counter-clockwise and the compression character becomes more and more aggressive, with the peak path taking over control during most situations. At extremes, the RMS path will turn off completely. Peak crest settings below ~2dB deliver aggressive compression styles, values between 2-8dB represent the sweet spot for fast and tight compression, and anything beyond 8dB results in very smooth compression. For more dirt and grit, you’ll most probably want to select a low Peak crest value, or in doubt, turn the RMS section off by turning the Peak Crest knob full left.

Kotelnikov’s peak path is extremely fast and precisely follows the configuration set by the operator. Aggressive settings can quickly lead to annoying artefacts, the trick is to prevent the peak path from controlling the “body”, the tonal parts of the signal, which would make the distortion far more audible. This balance can be directly controlled via the Peak crest setting.

Given a complex wideband input such as a stereo mixdown, a fast peak release in combination with a moderate RMS release time will generally produce the most transparent, artefact free compression results. The faster the Peak release timing, the more effective the compression will generally be. Fast release times substantially reduce the amount of long term high to low intermodulation distortion, the main cause of audible overcompression in wideband dynamics control. A fast timing tends to sound more natural and transparent than slow release times, despite the substantial increase of harmonics distortion. Given a balanced Peak crest value, this increase of harmonic distortion will mostly affect transients. 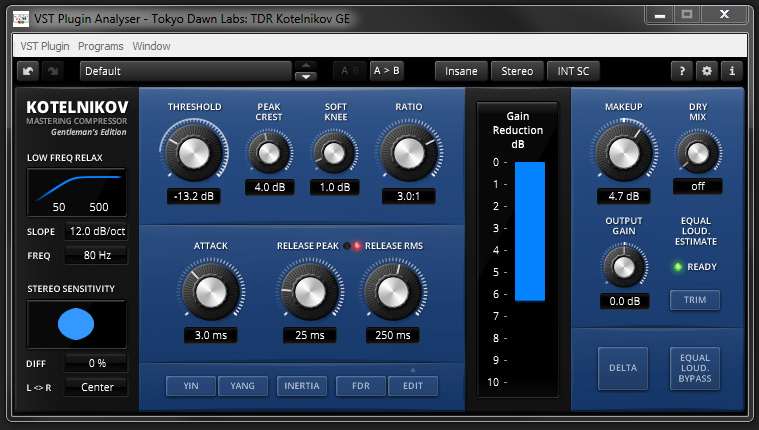 By default, with active peak and RMS paths and a sensible Peak crest setting, Kotelnikov will naturally avoid keeping the peak path active for too long durations. Instead, it will hand over control to the clean RMS section as soon as possible. 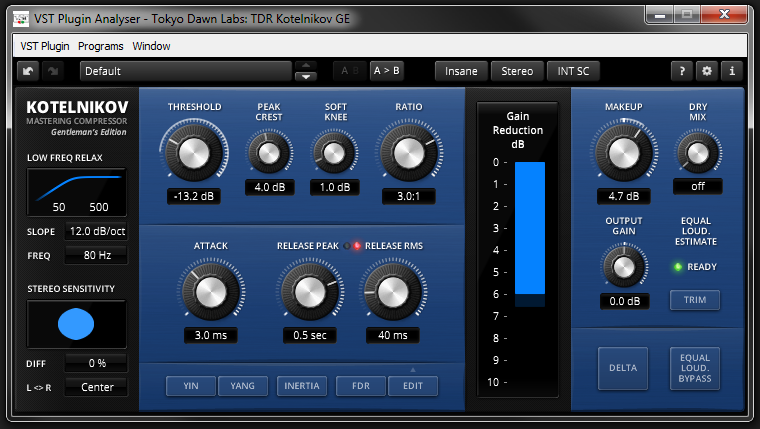 The Yin and Yang buttons relax the symmetry of Kotelnikov’s detectors, which in turn provokes the production of a far greater amount of even ordered harmonics. Yin focusses on the LF region, Yang covers the HF area. These options also substantially affect how the compressor handles transient content. 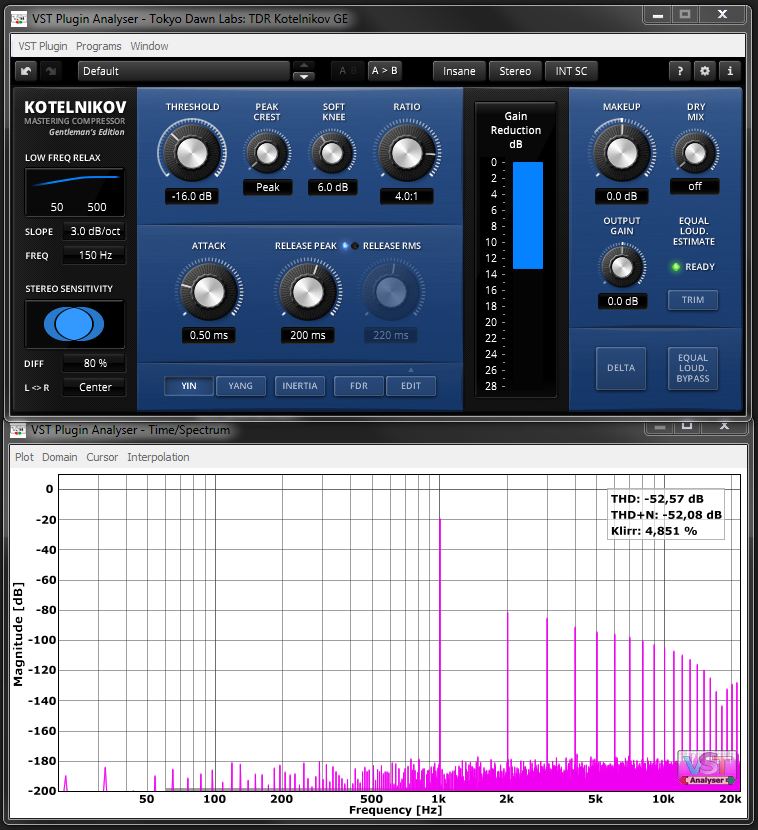 These features are not comparable to saturators, as they purely depend on the amount of gain reduction.

As such, the effect of Yin and Yang will directly grow with compression intensity and speed. Both options show their greatest effect with fast attack and release times, almost exclusively for the peak path. This offers the advantage that the Peak crest knob controls the amount/depth of Yin and Yang, with most of the effect is then being pushed towards transients content rather affecting than the whole signal.

Yin can add some sense of size to the low end, Yang can often add an interesting texture to voices and other lead instruments.

The effect has similarities with the behaviour of opto-copplers. Dynamics processors built around them tend to behave somewhat “sticky” at low amounts of gain reduction (and general activity), and speed up at higher amounts of GR. 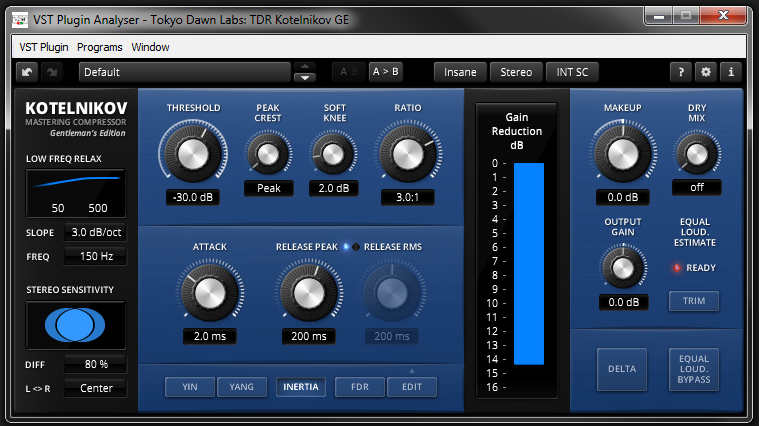 While inspired by the beneficial aspect of classic audio technology, Kotelnikov’s Inertia mode has none of the timing restrictions inherent to optically controlled dynamics processors.

The Inertia example has a much more relaxed feel to it, with the higher level events seemingly having more space. The effect is best explored with your own material.

This mode is specifically meant to operate at very deep thresholds, and with the intention to keep the GR limit fully “saturated” for most of the time. This results in a static attenuation for high energy content and a boost during low level passages. The GR limit is restricted to a few decibels only (2-6dB), in dependence of the ratio parameter.

As with Inertia, timing depends of the amount of gain reduction, but in an inverse manner and only for the release parameter (release time slows down with GR). 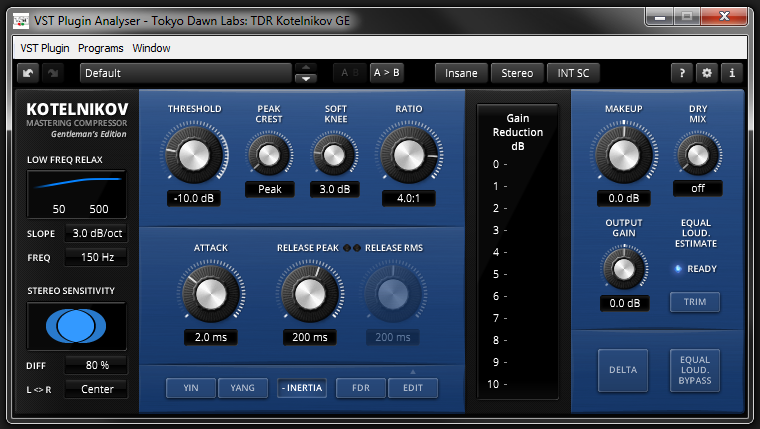 A shelf reducing ratio at low frequencies can add a nice weight to the signal, while compressing the upper frequency range:

Another interesting alternative is the EL Curve, and its opposite:

The EL Curve accurately reproduces the relative differences between the equal loudness curves in dependence of playback level. With the settings shown above, the compressor will generate the strongest reduction (i.e. “ratio”) in the most audible regions.

Note the smooth and warm character in this case. The opposite Equal Loudness Curve FDR on the other hand produces much sharper results:

All mechanisms described above can be combined to enhance the richness of compression sound in a subtle, stylish manner. Bear in mind that Kotelnikov’s wide parameter range can quickly produce unusable results, especially if timing parameters are set in a wildly extreme and random manner. A solid, transparent sounding setting is probably the best starting point for any creative fun and abuse.

A state of the art wideband dynamic range controller. Perfectly suited for stereo bus compression and other critical applications.